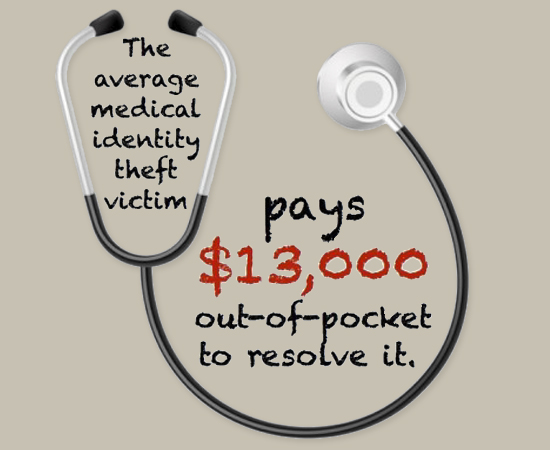 Is Your Doctor Safeguarding Your Information?

Identity Theft – and Medical Identity Theft in particular – are on the rise. More than 250,000 Americans have had their medical information stolen and misused in recent years. And this isn’t petty larceny. Experts note that while individuals who have had their credit-card data stolen are usually wrangling with their banks over losses of as little as a few thousand dollars, medical ID theft can leave victims, and the doctors and hospitals that provided the care, staring at bills that are exponentially higher.
“The American Medical Association will continue its leadership in protecting the confidentiality, integrity and security of patient specific data,” said Robert Mills, spokesman for the American Medical Association in Chicago. “The patient is paramount in the practice of medicine and everything that can reasonably and lawfully be done to serve that interest must be done by all physicians who have served or are serving the patient”.
Law enforcement authorities say that more and more frauds are being perpetrated by organized crime rings who steal dozens, and sometimes thousands, of medical records, as well as the billing codes for doctors. The rings then set up fake medical clinics—offering free health screenings as a ruse to draw in patients—that submit bogus bills to insurers, collect payments for a few months, and then disappear before the insurers realize they’ve been had. Health records now fetch $50 to $60 each on the black market, vs. a mere 7 cents for stolen résumés.

Last year, California authorities busted a ring that recruited patients from a local senior citizen center with offers of a free checkup and a case of Ensure nutritional supplement. In the three months before authorities raided the clinic, the ring had billed $900,000 for diagnostic tests it had never performed. “Yesterday’s drug dealers are now working in today’s health-care fraud,” says John Askins, an investigator in Florida’s state insurance fraud division. “It’s more lucrative, and they don’t face the same dangers they do in the narcotics trade.” The penalties, if they’re caught, are lower, too.

Health-care providers say the Bush Administration’s initiative to push doctors and hospitals to convert their paper-based patient files into digital records should help reduce the number of medical ID frauds. “Our software has become more sophisticated, particularly in identifying spikes in usage—someone who normally goes to the doctor once a year and suddenly goes 25 times in a 12-month period. It’s a red flag,” says Byron Hollis, national anti-fraud director for the Blue Cross Blue Shield Assn., a trade group for 39 health plans.

But some privacy advocates fear that the rush toward digital health records could ironically create new nightmares for victims of medical ID theft. Rather than residing in a single doctor’s paper files, fraudulent information could circulate in other medical databases across the country. Given that some medical ID thefts are “inside jobs,” wherein rogue clerks sell patient data to fraudsters on the outside, privacy advocates believe that allowing data to flow more freely around a national network could make such thefts even easier. “they can expect [medical ID theft] to grow the more they move toward an electronic health-care system. It’s going to be a disaster,” says Dr. Deborah Peel, an Austin, TX psychiatrist and founder of the Patient Privacy Rights Foundation.

So what can the medical community do to help stop this nightmare and keep our reputations in tact? There are some very simple & inexpensive steps that can be taken to help safeguard the patients information and the Doctor’s reputation.

1) First, they can run criminal background checks on all employees and continue to run them on a routine basis.

2) Another simple thing they can do is take pictures of the patients. Digital cameras are inexpensive and the photo can be downloaded directly into the patients record. When the patient comes, in they simply match him to his patient identification that they have on file. If there is something that doesn’t quite match up then they can request more documentation from the patient.

3) Third, When it’s time to update the equipment, they can have the old computers and hard drives, etc. destroyed by a professional destruction service.

4) Another important thing they can do is to provide training for staff on records management and security. “I can’t tell you how many times I have walked into offices and found stacks of records just sitting on desks, open to anyone who walks by. Worse yet are the huge number of file boxes stacked and dated with information available to anyone who has access to the offices, such as a janitorial staff, or courier service, even other patients.” says Marylee Jacobs of CROWN SHREDDING. “ Simple training on how to manage the desk area and create new habits, could deter huge losses.”

5) Staff equipped with individual, secured desk consoles is one of the best ways to help companies manage their risk for identity theft. They spend large amounts of money on equipment for the office, such as computers and copiers – but because they have not established the habit of utilizing security consoles with document destruction services – they neglect the security of the patients, clients and customers, not to mention their own reputation! By not spending money on secure document destruction they potentially risk their practice.

What to do if you might be a victim of identity theft . . .

Those of us in the information security business talk about identity theft all the time. Identity Theft has risen 13% from 2010 to 2011. We thought it might be a good idea for our clients to have a check list of things to do if you feel you have become a victim. Remember: “THIS IS NOT LEGAL ADVICE”. It’s just a suggestion on where you can start when you feel victimized!

Call the IRS and inform them you believe you are a victim of identity theft. (Often the way you will find out that something is amiss is when you don’t receive your refund check. It may have been issued to the thief who has assumed your identity).

Contact the Federal Trade Commission (877-438-4338). After you contact them by phone, you will be sent an Identity Theft Complaint Affidavit.